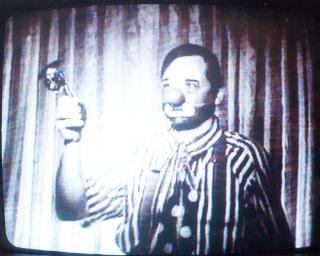 Eric B. Griswold as Hitler The Clown

Eric joined Joy Farm in the first season playing the part of Beladante, a vampire.  His extreme wit and unique perspective had a hand in forming the philosophical outlook of the show.  Eric and Mark played off one another in their like for alternative reality, irony and science fiction.  Eric was one of the primary writers for the show during its first 5 seasons and penned such Joy Farm classics as The Writer, Hitler: The Clown Years and Care of the Crevadis.

With a knack for creating sketches that showed the absurdity of modern life and in particular how we may tend to make things more complex when they need not be, Eric created sketches such as the one which  promoted a new invention called the Barking Dog Detector; used to detect if a dog was barking.  Further, Eric uncovered many of the secrets behind the Clevian history.  He continues to uncover Pieces of Clevis at Snowflake Center.

Continuing his quest for a Utopian society, he is deeply involved in Burning Man and continues to bring unique creativity to the Milwaukee scene.  His web site is www.clevian.com